Saint Lucia also St. Lucia is the only country in the world named after a woman. Her stunning beauty is captivating, her personality is warm and loving and her nature is wild and free. The Atlantic Ocean kisses her eastern shore, while the beaches of her west coast owe their beauty and charm to the calm Caribbean Sea. She is a small, lush tropical gem with a wealth of exciting experiences to live for. 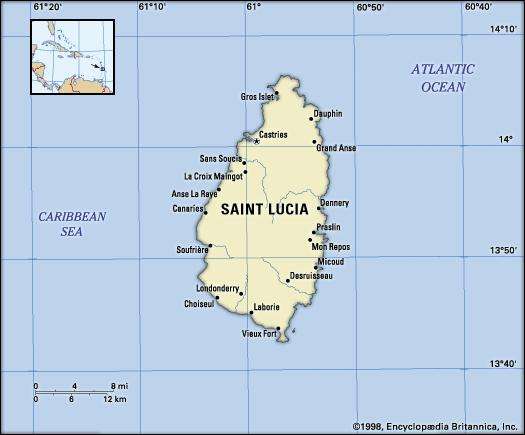 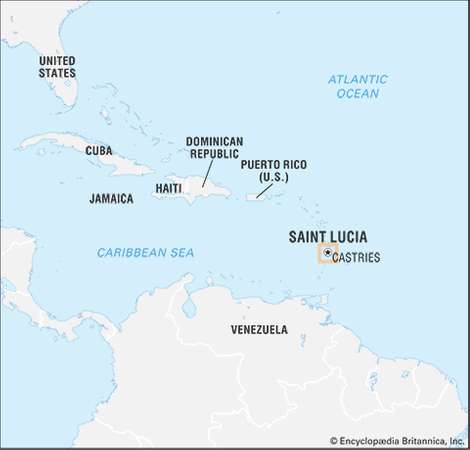 Saint Lucia is one of the Windward Islands of the Lesser Antilles and a member of the Commonwealth, strategically located midway down the Eastern Caribbean chain, between Martinique and St. Vincent, and north of Barbados. St. Lucia is only 27 miles (43 km) long and 14 miles (23 km) wide with a population of approximately 175,00. The capital and major port is Castries.

The island is of volcanic origin and possesses a topography and ecology of stunning beauty. It is bisected from north to south by a central ridge of wooded mountains, the highest point being Mount Gimie (3,120 feet [950 metres]). Many streams flow from the mountains through fertile valleys. In the mountainous interior lies the enormous and magnificent National Rain Forest covering approximately 19,000 acres of lush mountains and valleys with wild orchids, giant ferns, many other indigenous tree species, exotic flowers and fruits. Brilliantly-plumed birds of paradise abound; the bird population includes the endangered indigenous brightly-hued St. Lucia parrot known locally as the “jacquot”. The rainforest is broken only by verdant fields and orchards of banana, coconut, mango, breadfruit, and papaya and many other fruit trees.

In the southwest are the breathtaking, unforgettable primeval coastal spires, St. Lucia’s most famous landmark, Gros and Petit Pitons (2,619 feet [798 metres] and 2,460 feet [750 metres], respectively), two immense pyramids of rock rising sharply from the sea and enclosing a small bay. Near Petit Piton is the now dormant world’s only drive-in volcano with its boiling sulphur springs, a choice tourist site from which the nearby town of Soufrière takes its name. The spires and the drive-in volcano are part of the Piton Management Area, a UNESCO World Heritage Site.

The island’s steep coastlines and lovely reefs offer excellent snorkeling and scuba diving. The rainforest preserves of St. Lucia’s mountainous interior are one of the Caribbean’s finest locales for hiking and birdwatching.

Saint Lucia’s cultural treasures are a fascinating mélange of its rich past and its many different traditions. The island is dotted with aged fortresses, small fishing villages, open-air markets luxury resorts and fine restaurants. It also possesses excellent facilities for golf, tennis, sailing, and a host of other leisure pursuits. The island’s people have earned a well-deserved reputation for their warmth and charm.